A famous meeting between Salvador Dalí and Sigmund Freud took place there in 1938, when the house in Hampstead was Freud’s “last home on this planet.”

The artist brought his recent painting “Metamorphosis of Narcissus” to show the doctor, and, he later claimed, took the opportunity to sketch the form of Freud’s skull d’après nature (from life).

Like many of the Surrealists, Dalí revered Freud as a towering genius who had solved the riddles of the dream, but Dalí‘s ideas about the shape of Freud’s head were all his own. As he tells it in The Secret Life of Salvador Dalí, the actual meeting between the two men was preceded by a number of fantasy meetings that took place in Dalí‘s imagination during his visits to Vienna. When Freud escaped the Nazis in ‘38, arriving in Paris en route to London, Dalí was eating snails nearby in Sens, and his dinner was interrupted by a shocking epiphany about the involute form of Freud’s brainpan:

“Several years after my last ineffectual attempt to meet Freud, I made a gastronomic excursion into the region of Sens in France. We started the dinner with snails, one of my favorite dishes. The conversation turned to Edgar Allan Poe, a magnificent theme while savoring snails, and concerned itself particularly with a recently published book by the Princess of Greece, Marie Bonaparte, which is a psychoanalytical study of Poe. All of a sudden I saw a photograph of Professor Freud on the front page of a newspaper which someone beside me was reading. I immediately had one brought to me and read that the exiled Freud had just arrived in Paris. We had not yet recovered from the effect of this news when I uttered a loud cry. I had just that instant discovered the morphological secret of Freud! Freud’s cranium is a snail! His brain is in the form of a spiral—to be extracted with a needle! This discovery strongly influenced the portrait drawing which I later made from life, a year before his death.” 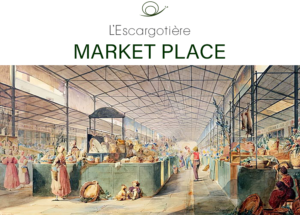